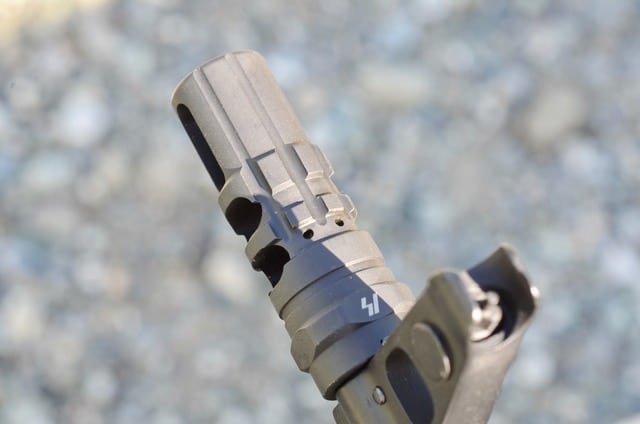 The market for AK-47 accessories has been weak for years, largely it has been centered around different quad rail systems or making your AK-47 accept M4 style stocks. Thankfully new blood has been introduced into the AK-47 accessory market in the form of the Strike Industries J Comp V2. The folks at Strike Industries have taken a modern look at a classic muzzle device and brought it into the 21 st century, for all the AK-47 owners who wanted an affordable and useful muzzle device that is a little out of the ordinary 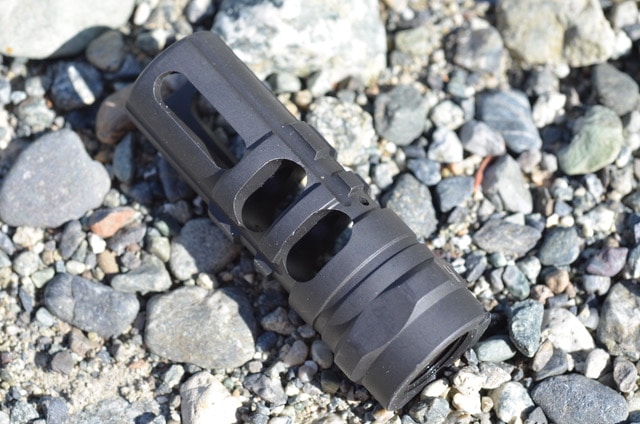 Strike Industries has been around since 2011 and is the result of CEO Garrett Keelers hard work and innovation to constantly work at expanding the company’s offerings while not sacrificing quality and pricing. The company offers a huge line of accessories to fit a wide array of firearms from the traditional AK47 & AR-15 shooters all the way to the ultra-rare and very restricted Heckler & Koch MP7 Submachine gun chambered in 4.6mm x 30mm

The J Comp V2 muzzle device is based off the Type 89 Compensator that is commonly found on the Howa Type 89 Assault Rifle used by the defense forces and coast guard of the country of Japan. The Japanese, due to laws and restrictions, built their own military rifle and with that designed their own muzzle devices for that rifle. As joint Japanese-United States military efforts have continued for decades American servicemembers got an eyeful of the Japanese muzzle device and the legend of the Type 89 muzzle device grew. It was, however, practically unobtainable until… well that was until the folks at Strike Industries changed all that. 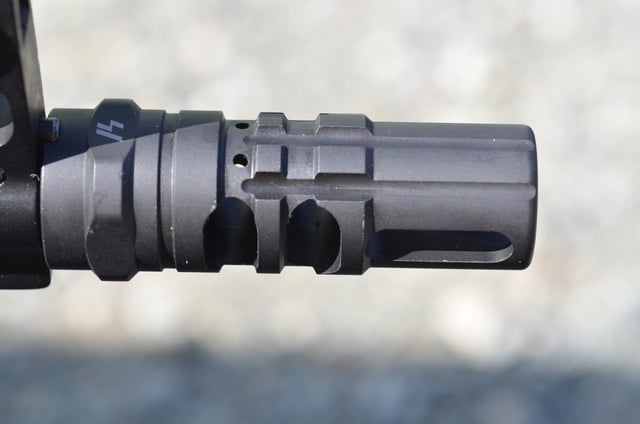 Sometimes it’s hard to make sense of the changing world of muzzle devices and what is the new magic pill in the world of reducing felt recoil and muzzle rise. That’s why we want to look at the specifications of the Strike Industries J Comp V2 muzzle device and what those are meant to accomplish.

When I first received the Strike Industries J Comp V2 I noticed its longer than most other muzzle devices I have experience with. This isn’t a negative thing just a general observation about its dimensions. The J Comp V2 is a good-looking muzzle device and the designers seemed to work a blend of form and function to give a part as small as a muzzle device a bit of flare to it. Further inspection of the J Comp V2 shows that the device features two large chambers and two smaller chambers located in the 3 and 9 o’ clock positions. They definitely will expel any concussive force away from the shooter and keep the muzzle from rising during rapid firing.

The top of the unit however only features two small holes to direct gas upwards, this is a bit puzzling to me, especially for a unit designed to help stop muzzle rise. 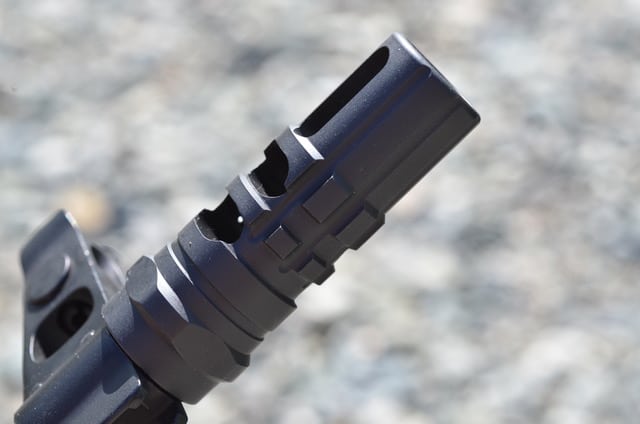 Installing the J Comp V2 muzzle device is very straightforward if you have any experience with left handed 14-1 threads. This left-handed thread pattern is the opposite of practically every other threaded muzzle in the known world. It’s part of the Soviet origin weapons charm. A point to note here is that the Strike Industries J Comp V2 does not come with a crush washer. In fact, I don’t think I can remember an AK-47 muzzle device ever coming with one.

The range session for the J Comp V2 is coming in the very near future at my local range. I intend to test it side by side with two other brands of popular muzzle devices on my AK-47 clone. If I’m lucky I might be able to borrow a friends select fire AKM and really test the compensator out a bit. It’s one thing to test a muzzle device on semi auto but it’s a completely different animal to test that same unit out under short burst fully automatic fire. During full auto bursts, any muzzle rise that is normally felt on a rifle will of course increase dramatically.

We have laid out a fine selection of the dirtiest Wolf and Tula ammunition that I could find locally for our upcoming range session. I personally never feed any of my AK series rifles anything but the cheapest rounds I can find. In my mind if an AK can operate on a steady diet of Eastern European 7.62×39 then it can run on anything made with reloadable brass. I am bringing along a few friends so we can form a collective opinion about the Strike Industries J Comp V2, those friends also happen to own AK’s so I may donate the compensator to one of them by the end of the day. One thing is for sure, at the end of the day 500 rounds of 7.62 x39 ammunition will be shot through the J Comp V2 and we will see if it lives up to the hype. In this article, we will be taking a look at some of the best muzzle devices currently on the market, including the best muzzle brakes, flash hiders/flash suppressors, and compensators.

Muzzle devices are a great upgrade for any AR. Compared to some other AR-15 parts, they are extremely easy to install, they’re affordable, and they will immediately improve your rifle’s performance.

We’ll be covering the best options for all of these types of devices, but let’s first quickly go over the pros and cons of each type of device.

Muzzle brakes are small devices which screw onto the end of the barrel, designed to help minimize recoil and muzzle climb. When a rifle is fired, an explosion takes place within the gun that sends propellant gas through the barrel and launches the bullet. The force of the propellant pushing the bullet forward is the same force that causes recoil (the pushback against a shooter’s shoulder when the gun is fired) and muzzle rise, also called muzzle flip (the force that causes the muzzle to lift up or rise when the gun is fired).

Muzzle brakes use ventilation ports to direct propellant gas away from the rifle, thereby helping to minimize recoil and reduce muzzle climb. This allows shooters to spend less time recovering from recoil, which speeds up target reacquisition for successive fire. It also helps reduce shooter fatigue.

Muzzle brake designs vary widely, as do performance and quality. We’ll be highlighting important features to look for in a good muzzle brake while going through our list.

Most often muzzle brakes direct gas to to the sides, which makes them great for easy shooting AR-15s for the range, long range rifles, or even competitive shooting guns. The downside to this is that the concussive forces are pretty extreme, making muzzle brakes a poor choice for tactical engagements and generally shooting in close proximity to others.

Editors Note: I love Faxon’s FX5500, which I bought on a whim at my local shop, but with its 3 prong muzzle brake it’s terrible for shooting at indoor ranges unless your goal is to piss off those in the lanes next to you.

Muzzle brakes are also louder than other devices and allow for more muzzle flash than flash suppressors.

A final important thing to note regarding muzzle brakes is that if you ever plan on shooting from a prone position, be sure to avoid muzzle brakes with ventilation ports that point directly toward the ground. These types of brakes will inevitably cause dust and dirt to be kicked into the air, subsequently blocking your vision. This is a good way to immediately identify a poor design.

To that end, compensator ventilation systems are designed to direct the propellant gas directly upwards to push back against muzzle rise. This is especially useful when firing shots in quick succession, which is when muzzle climb becomes most intense.

Compensators don’t cause side-blast but they do increase the noise generated from the gun and don’t help reduce flash.

Flash suppressors, or flash hiders, are primarily designed to preserve a shooter’s night vision by reducing or eliminating muzzle flash. They also help to keep shooters hidden from the enemy when firing during nighttime combat, though the value of this tends to be overestimated by those who’ve never been in battle. Flash hiders work by rapidly cooling the propellant so that it burns with less intensity when it leaves the barrel.

Those who are actually going to be using their rifle for tactical applications or those of you who are building a «SHTF gun» will almost certainty want to use a flash hider.

With that out of the way, here’s our picks for the best muzzle brakes, best commentators, best flash hiders, and best hybrid muzzle devices. You’ll notice the majority of these picks are actually hybrids, though some of the devices have a specific purpose.

Перевести · The SI JCOMP Gen2 is the classic Type 89 compensator re-engineered and updated for the 21 st century. Due to end user feedback, the favorite features of the original are retained, but the J Comp …

Give me a BRAKE — Strike Industries J-C…

Перевести · 28.07.2017 · www.workthetrigger.com for deals and links Replacing my old generic compensator with a Strike Industries J—Comp …

Перевести · 11.08.2013 · Just a small teaser for the upcoming review and video of the J—Comp from Strike Industries…